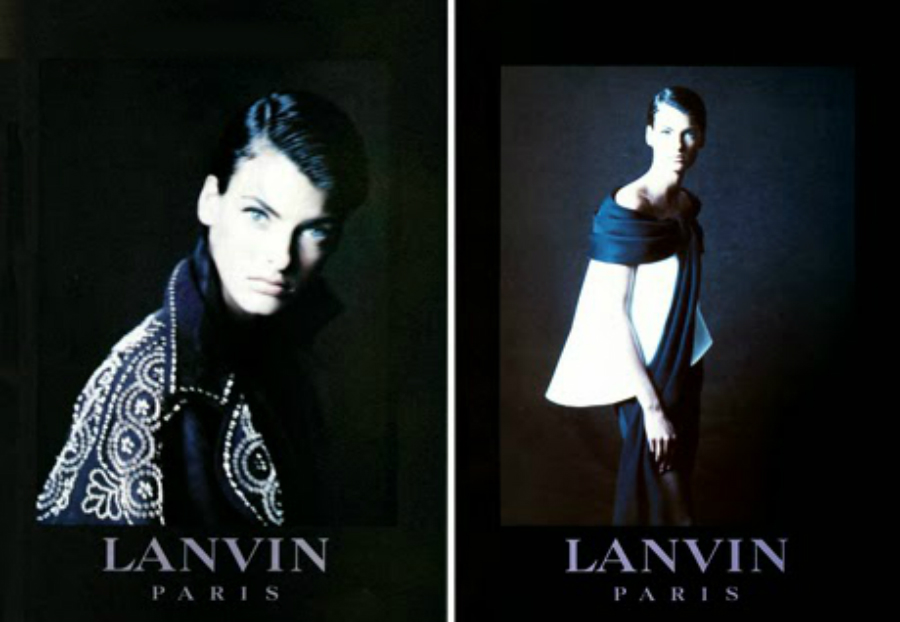 Nel 1989, one hundred years after the founding of the house by Jeanne Lanvin, Claude Montana He takes the reins of the Haute Couture division, strongly supported by’ then the new executive director Léon Bressler. "Claude Montana is a sample: with him there is total freedom and modernity, "he said in an interview.

by CLAUDE, It is chosen by Lanvin It is the highest recognition of his talent and his ability to perpetuate the traditional values ​​of haute couture:  her shining genius, explosive and uncompromising, It equipped with high sophistication and thoroughness, It is very sensitive to the codes of haute couture, and this will allow him to explore his creativity to the maximum. The news generated great enthusiasm in the fashion world: Pierre Cardin and Christian Lacroix Candid write letters of encouragement, Jean Paul Gaultier will attend his first show, appreciating his work at the end of the parade.

In reality, Montana's work has always been very close to the world of haute couture for the great attention given to the quality of the fabric and the tailoring, to search for pure lines, details, the sophistication of dramatically architectural silhouettes. But the demonstration of the affection comes from Yves Saint-Laurent: among them there is a so sincere mutual esteem that Yves AluI dedicate a book, pubblicato nel 1987, “a Claude, I admire, with warmest wishes "and Claude assist in every major show of YSL.

The Claude gaze turns to all the iconic figures of French culture, Balenciaga who appreciates for its precision and beauty of the cuts to Christian Dior, for the innovative power of the New Look. The main goal of Montana is to develop a different vision of couture that gives it new life, albeit respecting the traditional codes. In this new adventure, He is supported by his sister Jacqueline, his assistant, and its model-muse Axelle.

Montana spent two years with five collections from Lanvin, two of which (FW 1990/91 e SS 1991) win "the Golden Thimble" -:a further recognition of his exceptional talent. His debut by Lanvin, nevertheless, He has divided the people of fashion in its attempt to introduce radical changes in the way we produce and organize a fashion show. 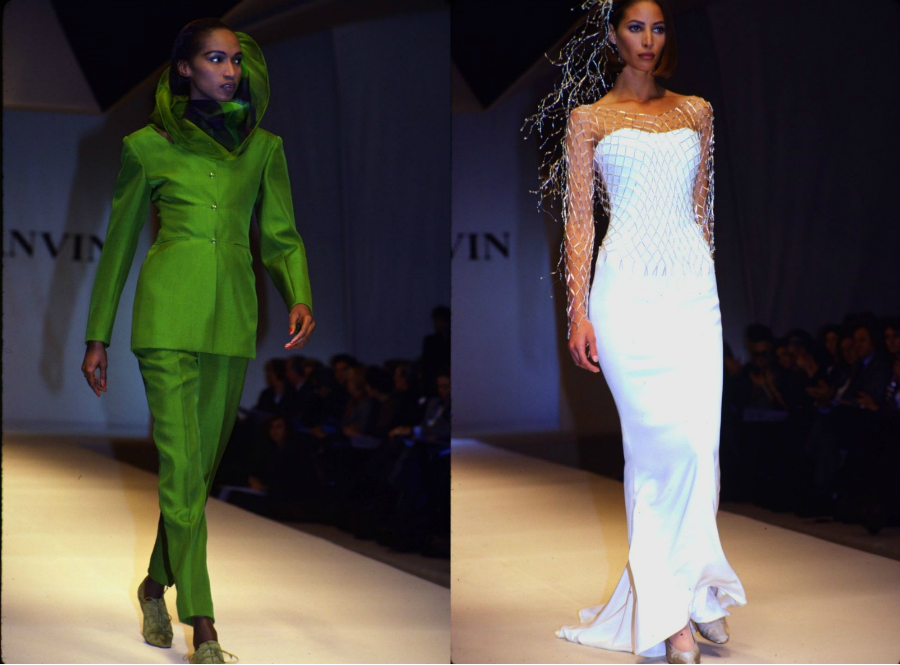 His first collection for Spring / Summer 1990 He has not reached the expected response from many: the press reports are cautious and doubtful and, in some cases, highly negative. "The first collection was traumatic", Montana says some years later. "I have not dealt well with the press reactions. I kept looking at the video of the parade and again to figure out where I had wrong. Léon Bressler, Luckily, I supported me ".There are a few possible reasons for this failure, in particular the fact that the show is performed in a wide tents erected at "Le Champ-du-Mars", setting little peculiar for haute couture, accustomed to more intimate locations. Inoltre, Models have traveled the walkway in its entire length, turning and disappearing backstage without going back a second time, as was the practice tempo.In interview with Mory Fréderique, Montana confides that "I still had to learn: the haute couture made me see things differently. Con il ready-to-wear, There are limits that can not be exceeded; in couture, there are no obstacles or restrictions. The important thing is that the clothes do dream. Thanks atelier Lanvin, I was able to realize my dreams and I worked with a talented team, determined and passionate. " 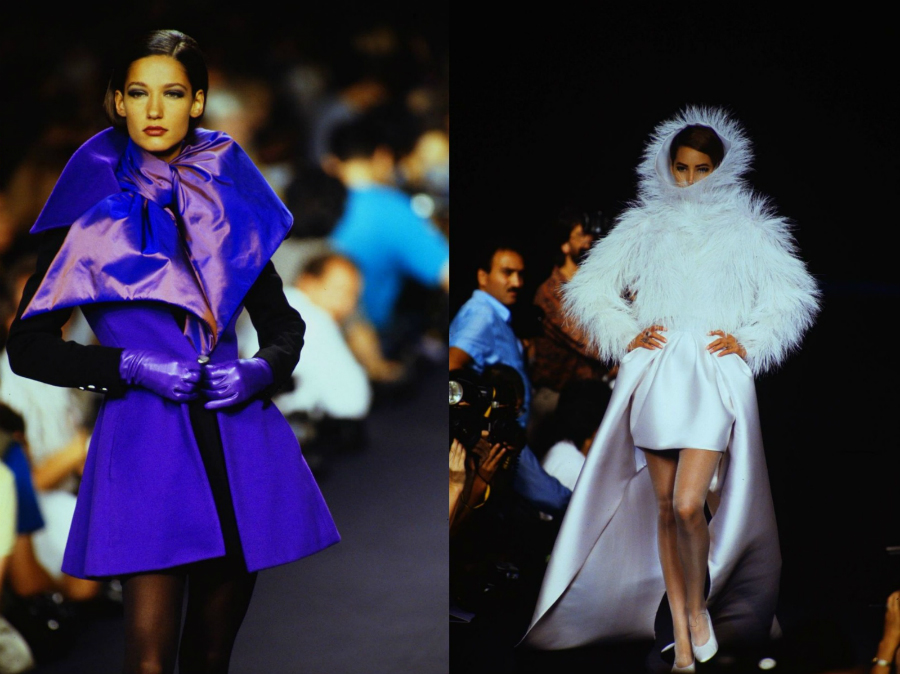 The next two collections, as anticipated, They have been a great success. The Autumn-Winter collection 1990-91, Presentata al Palais de Chaillot, It is characterized by a strong futuristic modernity, exemplified by a coat "constructivist" cashmere black faille profiled ivory and red, a reversible coat in black and white wool worn over a black velvet dress, coats a steel gray velvet and taffeta over a sweater jersey color granite and shorts "breitschwanz", a dress "work" throughout embroidered golden faille.

The palette is divine: night blue, brown iridescent, amethyst, steel, oro, granato, topaz, and the final platino.per, the bride finds refuge among feathers and sable . Il 25 Luglio 1990, "Le Figaro" celebrates the collection with the following words: "It is not a matter of reviving Jeanne Lanvin, but to impose one's self through a haute couture spirit that is far from ready-to-wear, which is exactly what we need. This woman belongs to a new generation, It belongs to the second millennium. Montana won the band top couturier ".Pierre -Yves Guillen of" Le Quotidien de Paris "says: “58 outfits, 58 opere d’arte, 58 precziosi objects, 58 sculture! Since the first output, I am expecting the next with such a level of impatience and expectation that only Hitchcock before he was able to elicit. And when the next outfit,  it's even better the previous.

I saw only one show of Montana, in January, and I not particularly impressed me. Today there are no words of admiration. No outifit remembers another: Ogun of them is carved and designed to tragic heroines of silent movies. Stars mythical, Impressionism tedesco.Dal hooded coat with a gigantic collar Doctors at the Art Deco gown and stole black ermine… They are wonderful clothes, glorious coats, luxury pure layers. The only description of some leaders is able to make us dream: a trench of ivory faille over a mink cardigan madreperlato, a tuxedo satin silk scarf with Ruby, a turquoise wool jacket paired with a black wool skirt, a gazar gold and silver coat over a dress "Lingotto" .The collection, defined by the press of an "astral charm", He won the "Golden Thimble" in July 1990 at the Palais Galliera gardens. Six months later,  il 31 Gennaio 1991, Montana won a new "Golden Thimble", delivered to him by Bernadette Chirac at the Hotel de Ville. 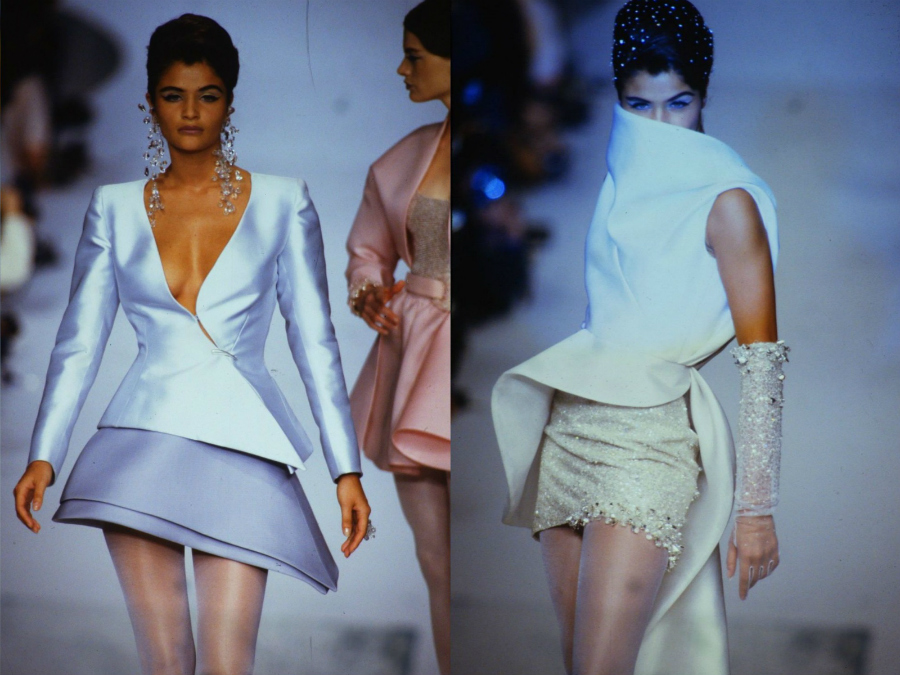 The Spring / Summer 1991 It contains many of the typical elements of the style Montana: a reversible coat with satin lavender metallic embroidery on a lavender organza dress; a dress-box sable champagne; a coat decorated with white feathers and silver combined with white sable shorts and a white satin blouse; a trapeze dress embroidered with pink sand organza shells; a coat embroidered with gold nuggets, worn over a skirt and a body in beige suede. "When I think of Montana", Jamie remembers Samet, "I see the organza, the transparency, a flower woman, a statue. It gives us artificial paradises with couture catwalks. We enter a world that does not exist ". 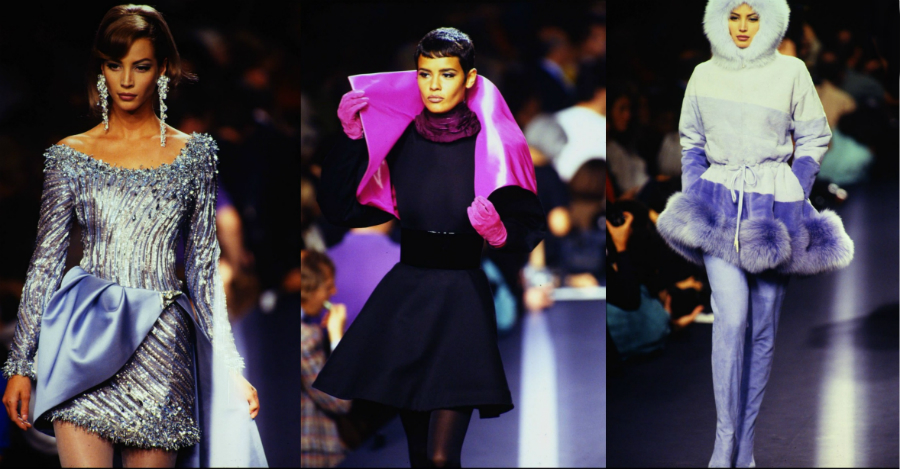 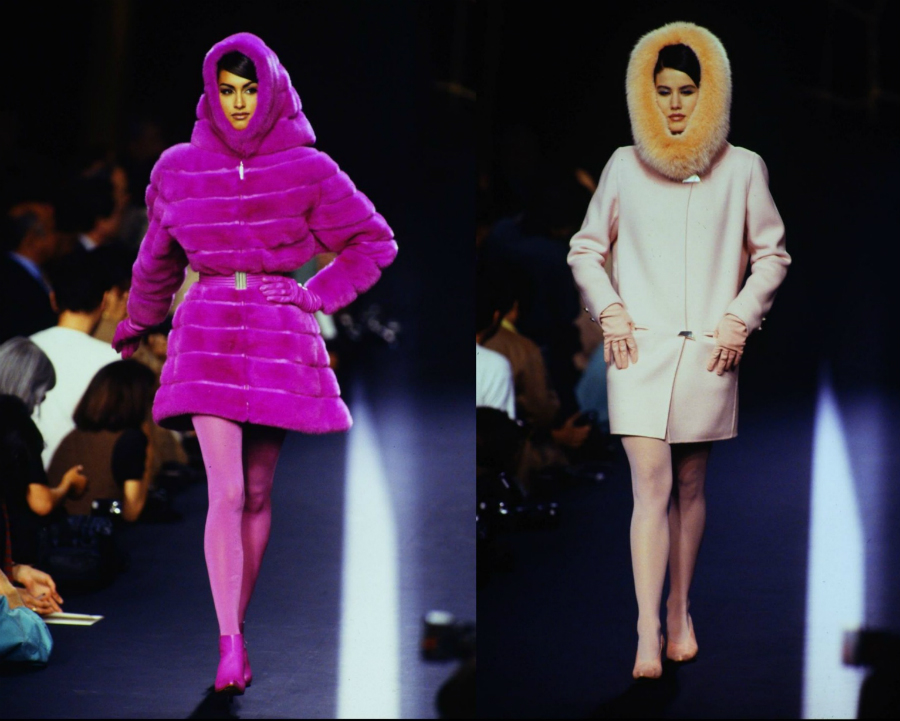 Il fotografo Tyen, author of many advertising campaigns of Montana and Lanvin, he claims: "We are able to recognize a bunch of Schiaparelli, massive forms of Balenciaga and the footprint of Montana from Lanvin. E’ became legendary: he gave his heart to Lanvin ".

The attention paid to the volumes and to charts cuts are the demonstration that the haute couture is an art form that does not give space to the improvisation, where everything is carefully calculated and performed with the highest precision.

For Montana, The haute couture is synonymous with freedom, where all things are possible, where you can experiment with new materials and there is great energy, despite the many hours of work. Claude Montana collects flower petals, small pebbles, pieces of land, sand grains, pieces of paper, images taken from books, Atlantic: this small collection to life the construction of the subtle harmonies of a collection. The colors are recreated on "gouache", on large sheets of white paper that provide the inspiration for the choice of fabrics and their colors. 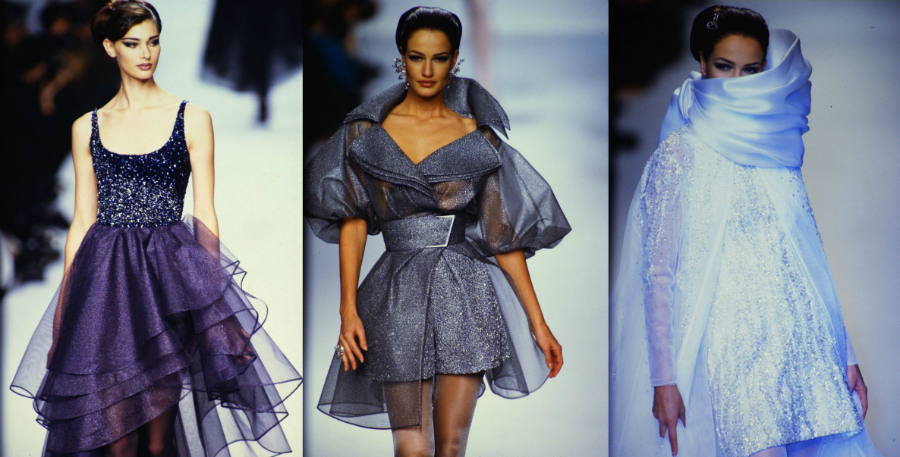 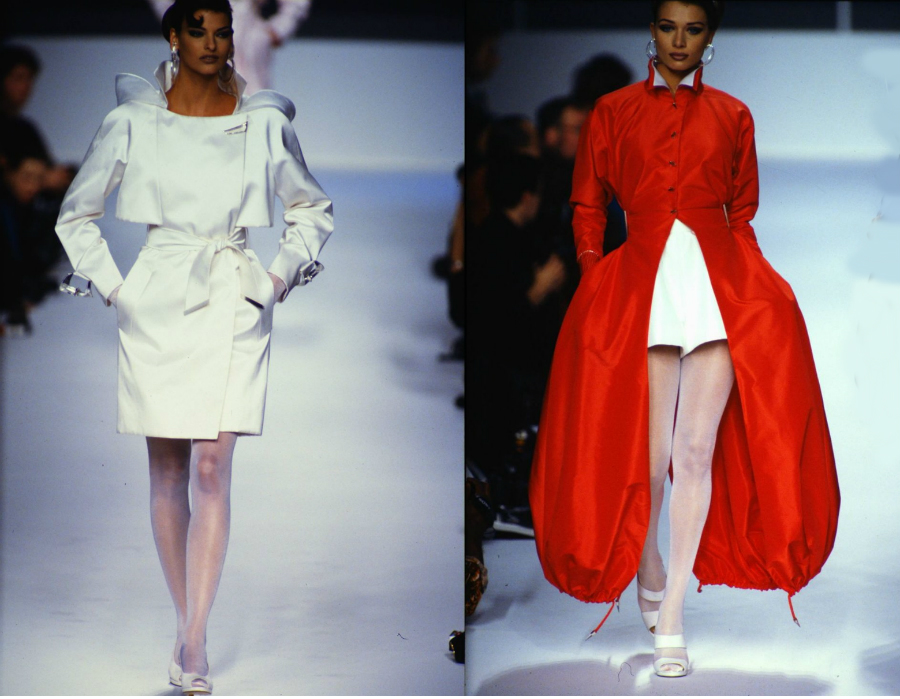 In the space of two years, Montana leaves an indelible mark in the world of haute couture. His latest collection for Spring / Summer 1992, It is acclaimed as an apotheosis of beauty and modernity.

Jeanne Moreau used to say: "I dress Montana because his fashion has no reference to the past, It is a designer who expresses himself in a cabinet button and natural. Another thing that I admire is his rigor…”

Colette Dubois, première atelier packaging for forty years, remember: "During our first meeting in the office of Jeanne Lanvin, I was impressed by Monsieur Montana. He wore leather pants and cowboy jacket and it was completely different from the kind of man who had worked for the company previously… It seemed to come from another world. Nevertheless,  I liked it from the first moment: I expected it to be rather arrogant and was very shy. We started talking immediately couture. Its collections, with their emphasis on the use of the skin, They were very far from what we had previously realized. When we started working together, He gave me the drawings and say: "This is what I want". I looked at the drawing and I thought "You, it's nice , but the rear?”. We used to have rich designs of explanations. He did not know what we were capable of and we did not know what he wanted. So we realized paintings and showed him: the first day of work with Montana, I was anxious to stars, but, alla fine, we understood what he wanted. We took the cloth that he had selected and we cut according to drawings, judging by eye. We performed the toiles and decostruivamo carry out various parts. We were composing the whole on wooden dummies. My role was to instruct my assistants, twenty people, thirty when he approached the parade.

With Montana, always had the impression that everything was working a miracle and had to keep revising our basic assumptions. Dava's important to look at cutting. It must seem very simple, but the things that appear in this manner are the most difficult to achieve. Mr. m. He encouraged us to do better. Sometimes I spent whole nights in the studio, trying to improve some aspects, to eliminate everything that did not work. We had a great mutual respect, it was a wonderful collaboration. Montana, the very sensitive personality, He was very enthusiastic about his work, every time he pushed ever forward: when he wanted a particular look, It was very strong, irrimoviibilee to the point that even a customer would induce him to change it. Each dress required from 175 all 200 work hours". 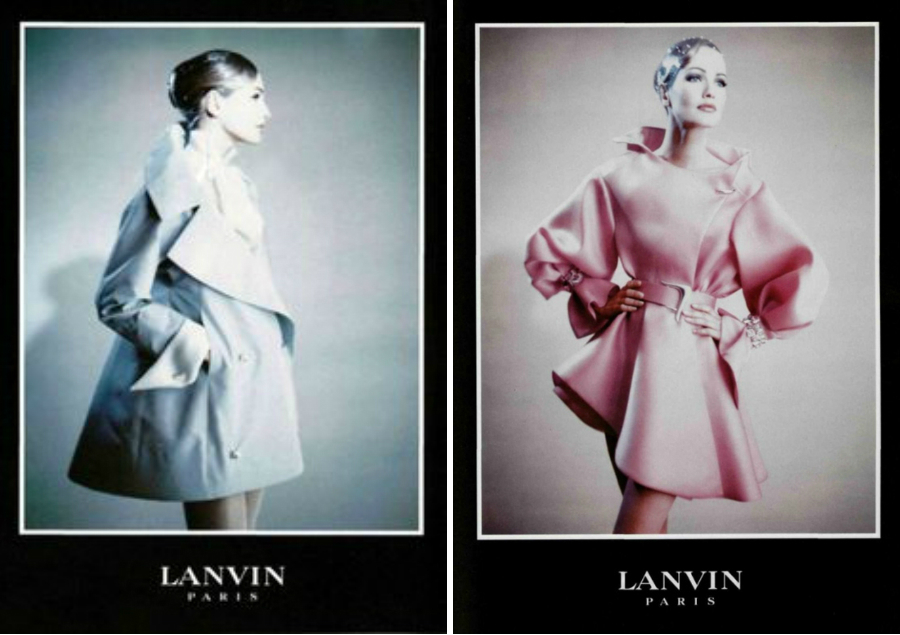 Claude Montana left in Lanvin 1992, decreeing the end of haute couture fashion house and leaving the fashion people a trace of meaningful experience, that would have great impact and influence and for other designers, that Claude's work on his collections ready-to-wear.

The expert François Lesage embroideries recalls that "the entrance of Montana in the world of haute couture Could be likened to that in a cathedral, very touching. He gave me an idea ("I want the sand, un po’ wind,  tropical climbing plant ") and he showed me his drawings and together we discussed all the things that would be our starting point. It was up to us to interpret his will, transforming a thought floating in the air and turn it into sketches. His collections were rich in emotions in a pure and rigorous style. . When he pulled off his latest collection, I cried and told him that was equipped with an enormous talent. It was very sad when he left Montana Lanvin, was a true couturier in his great attention given to cutting and choice of materials. Claude has a very contemporary approach, abstract, that reminds me of Yves Saint Laurent and his military look, with tunics and safari jackets. I get excited talking about him, I miss."