Behind every great woman there is always a big cat. Lulu Mayo (Probe publisher)

On the cover of this delightful book there is an unequivocal portrait drawing of Audrey Hepburn in "Breakfast at Tiffany" with the red cat in her arms who shares and marks the sequences of the film. Here is a prime example of a glamorous woman, elegant and intriguing with an adorable and curious cat at his side who often walks on the edge of the narrative

Lulu Mayo, the author of this book, revisits the famous phrase in which second Virginia Woolf behind every great man there is always a great woman, transforming the declaration into a feline key. 30 stories of women who changed history or became protagonists of their time, and their feline friends. Reading these tales they will be inspired by their lives and by the bond with their fur friends. Some of the "great women": Giorgia, Elizabeth of Russia, the Brönte sisters, Elsa Morante, Julia Child, Doris Lessing, Anne Frank, Yoko Ono, Audrey Hepburn, Taylor Swift, Rosa Luxemburg, Elizabeth Taylor, Gigi Hadid, Anna Magnani.

The book is read very quickly, it is a reading suitable for any age and has beautiful two-page illustrations, very nice and succeeds, a perfect summer reading.

Gigi Hadid model and icon is a cat lady, maybe you didn't expect it, so much so that in 2016 to worthily greet his beloved red and white cat Chub, failed, posted a photo on Instagram, in which he is with his boyfriend (in that time) Zayn Malik, ex One Direction. In the post he wrote: “we love you always chub”-"We will always love you Chub". 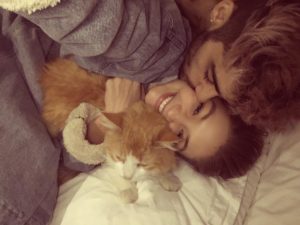 News of these days death at the age of 14 years of the reddish cat Bob become famous for his relationship with James Bowen, which he described in a book and then in a film as the feline save him from a life of addictions and self-destruction. 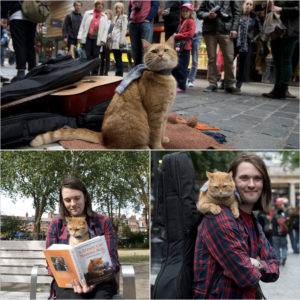 Bob, the street cat became famous because he was the protagonist of the book Walking with Bob written by James Bowen and then for inspiring the film namesake of the 2016. They both tell the real story of James: while he was being treated for his heroin addiction, the boy meets in front of his apartment a reddish-coated cat and in need of care; after having searched in vain for his master and having noticed that the cat now followed him everywhere, adopt it. The deep and spontaneous bond with the animal helped James a overcome his problems and above all to achieve fame. James e Bob, starting from them first meeting in 2007, formed a couple well known in the environment of street artists a Covent Garden in London: various videos that portrayed them together became popular on YouTube. Popularity that is confirmed also in these days,appunto, When hundreds of thousands of people they showed their emotion on social media following the news of Bob's death at the age of 14 anni. “Bob saved my life, very simply. It has given me much more than his company. With him by my side I found a direction and a purpose“, wrote on Facebook Bowen. “The success we have achieved together is miraculous. He has met thousands of people and touched the lives of millions. There has never been a cat like him and there never will be“.

It is true that cats steal everyone's heart and will remain there forever.