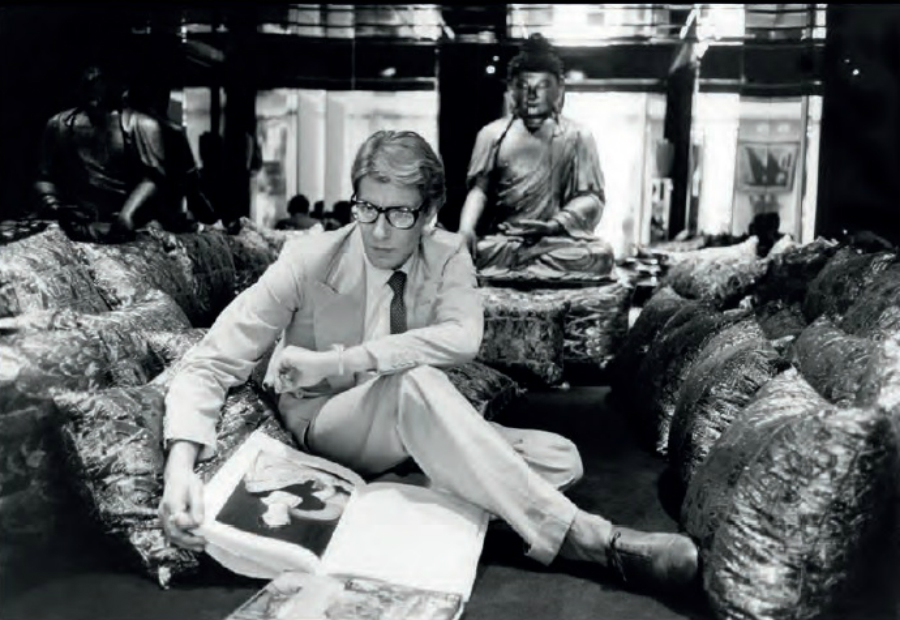 "I touched all countries by the dream. »Yves Saint Laurent

Until the 27 Gennaio 2019, he Museum Yves Saint Laurent Paris, Opened in October 2017, it is hosting the first of a series of exhibitions entitled "L'Asie Dreamlife of Yves Saint Laurent", which presents approximately 50 models haute couture inspired India, China and Japan. These leaders dynamically interact with Asian art objects borrowed from the Guimet National Museum of Asian Arts and private collections, in order to offer an unprecedented insight into the work of the French-Algerian coututier.

Thanks to his imaginary journeys, Yves Saint Laurent has built a dream vision of distant lands, filtered through the knowledge that came from his reading and the direct study of the exotic art, by studying local customs, exploring the folklore and overcoming stereotypes in order to offer a sublimated vision of legendary peoples traditions. Among all exotica, Asia has a special place in which the designer proposes a vision sometimes literal, sometimes sublimated. Throughout his career, He has reworked the traditional costumes to give life to his haute couture creations. 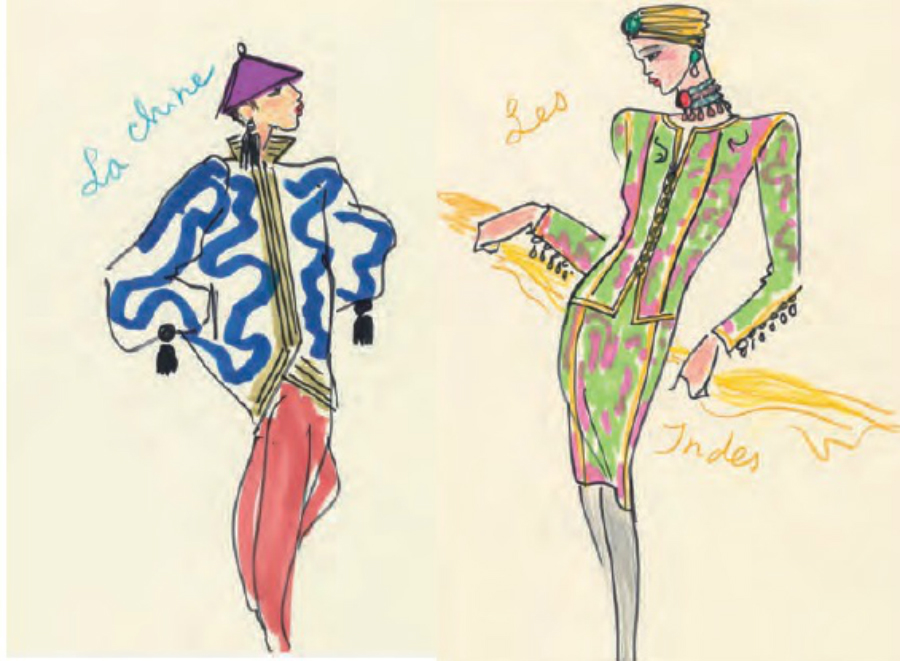 « I only have to watch a beautiful book on India to draw as if I had been.It is the role of the imagination. " Yves Saint Laurent

India is one of the major sources of inspiration for the production of YSL: his knowledge comes primarily from books that owns and since his first couture collection (Primavera/estate 1962) reinterprets the actual clothes closet of Northern India, making traditional Indian female coat. He developed, so, a taste for precious gold silk brocade, for metal embroidery in relief and sophisticated decorative buttons, princely costumes borrowed from the Mughal dynasty , who reigned in India from the sixteenth to the nineteenth century. The designer reinterprets the use of the latter resuming bijoux boteh, floral emblem in the shape of palm real power, which it is used in the same way as an ornament of sarpech (turbanti).

In the Haute Couture Spring / Summer collection 1982, this "Indienne", there are more than twenty gowns, dresses and suits in which the use of the Indian male bolero is decorated with elaborately worked edges, from trimmings and stones fell from sumptuous skirts in silk faille moiré. There are strong contrasts of complementary colors like bright blue and orange saturated, balanced silhouette is based on the relationship of the proportions and the masterful, decisive. 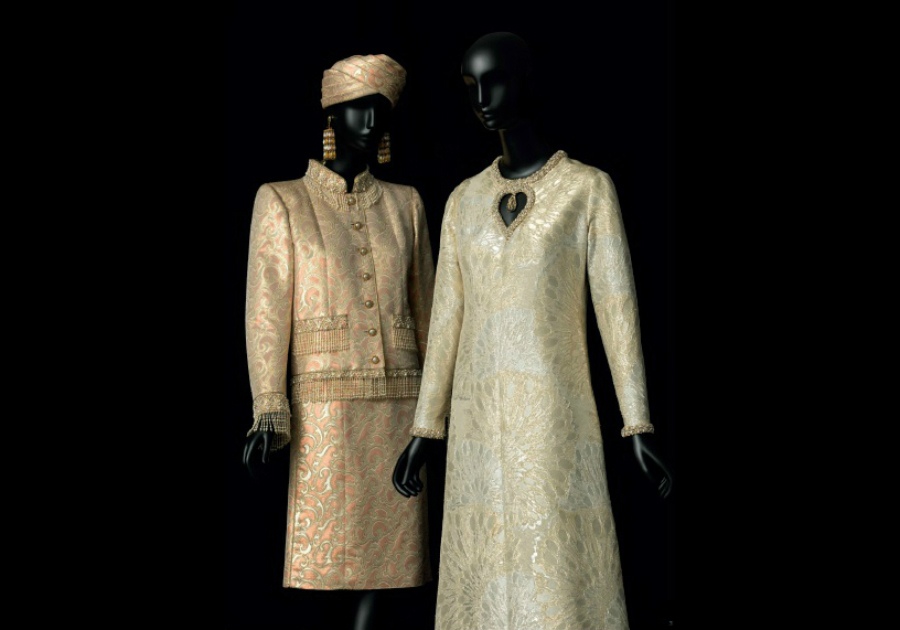 In his latest collection, presented at the Center Pompidou in January 2002, the designer proposes some light clothing draped that echo the style of sari, traditional costumes of India Hindu South: light mousseline, give the female body a grace and a unique sensuality, thanks to the game of see-very discreet. Nella mostra, the YSL creations are complemented by sumptuous eighteenth-nineteenth century dress, a silver equestrian statue and the doors of the grand palaces of Rajasthan, whose ornaments reminiscent of those played by Yves. The aesthetic references are evident also in the original sketches that are placed next to ancient miniatures.

« Pekin, however, remains a dazzling memory. this China, I had so ofteninterpreted in my creations, I found it exactly as I had imagined. The MEsuffices to a picture book to my mind is based in a place, or a landscape.[…] I feel no need to go there. I have so many dreams ... " Yves Saint Laurent

The first and last time that the creator arrives in China for personal exhibition dedicated to him in 1985: his love for this country emerges from the collections of books, film or art objects collected together in Swan, that inspire the creation of large volumes, historically symbolize the social status of the wearer. Echoing the traditional jackets worn by the Han women (originally from mainland China), YSL keeps this garment only cutting and important sleeves, while the garment construction remains typically Western. The Chinese-inspired looks especially respect the tradition of Peking Opera, not seeking to revive a garment so authentically true to historical tradition but to produce an aesthetic effect, highlighting the actors' movements.

"Fumes of my brain shredded resurface all dynasties, their rage, theirarrogance, their nobility, their size. I finally manage to uncover the secret of the Imperial City where I release, my aesthetic phantoms, my queens, divas month, my party swirls, my nights ink and crepe de chine, my lacquers Coromandel, my artificial lakes, my hanging gardens "Yves Saint Laurent

The first jewel of Chinese inspiration created by Yves is a choker, a red resin disc through which passes a black braids cord that ends with a silk pompom: It dates back to the Haute Couture Fall / Winter Collection 1969/1970 and it is worn with a black jersey jumpsuit with short sleeves. Un anno dopo, He finds a reference to Chinese custom Collection Haute Couture Fall / Winter 1970/71: capes embroidered suede worn with boots and hats with long pheasant feathers, full Moroccan, Indian tunics, ensemble embroidered with cherry blossoms, turbans and platform shoes borrowed from the forties and seven satin suits and silk velvet with flowers and multicolored butterflies, evoking the inspirational Manchu robes and those of shape qypao, typical of the Thirties Shanghai. 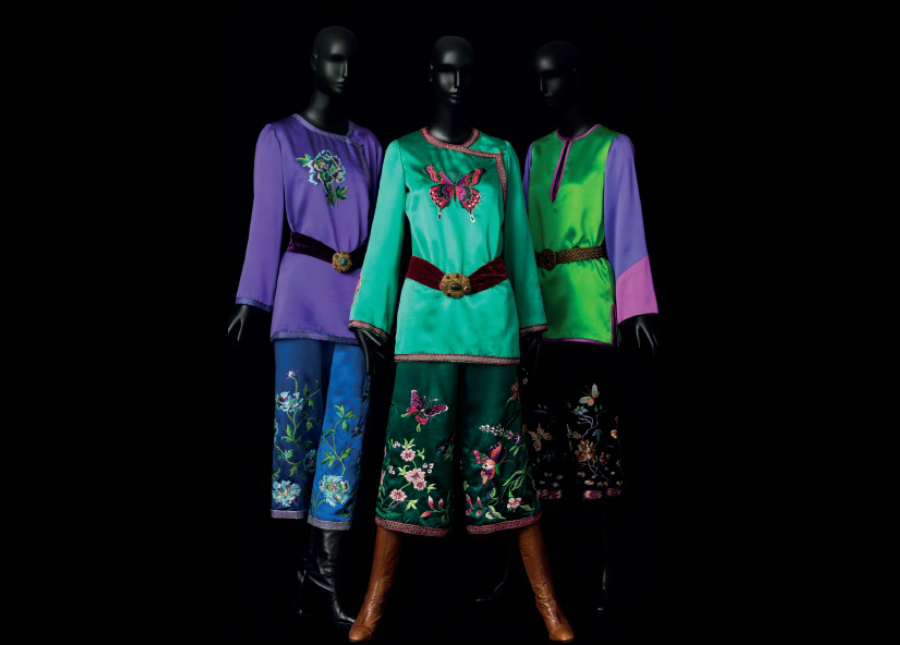 I caress tissue fluidly body, blouses are long and have the sleeve T, the collar, invece, with its closure on the side, evokes the "dragon" garments of Manchu dynasty. The passion for the rising sun reaches its highest peak in 1977, one year after the collection called "Ballets Russes", with his "Chinoise" collection: 132 models opulent and sometimes crazy, that does not wink only to China, but also to the boyars, the creatures of the wilderness, the "cocottes" semi dressed in silk satin and lace. On the head hats cone-shaped, important touches of fur, flowers and hats adorned with feathers, which go back to the punk movement of those years.The Chinese inspiration shines through the cut, the choice of colors and patterns, but also through the tissues and trims. The straight cuts, volumes and wide sleeves and decided are declined in shades of black, Red-orange and saturated purple embellished with gold details; in floral dresses, invece, the color spectrum is used all his power and is dominated by the blue, by green, from violet and pink. The silk has a special place in the collection, declined in satin and velvet smooth or processed: abundant is the use of wire and gold foil, as well as waxed and quilted embroidered fabrics, that recall the wax-lacquer invented by this extraordinary people.

« I chose opium as the name for this scent, is that I hoped intenselyhe could, through all its incandescent powers, release fluidsdivine, magnetic waves, the eye-hearts and charms ofseduction which create crazy love, love at first sight, the fatal ecstasywhen a man and a woman looking for the first time. " Yves Saint Laurent

In October 1977, Yves Saint Laurent is organizing the launch of her new fragrance Opium: caught by esthete, It is deeply involved in the creation of this fragrance, drawing, describing and validating each stage of the production process, from the creation of the pack to the press kit.

The various projects of the bottle, designed together with Pierre Dinard, They leave from the reproduction of the Japanese inro the Edo period or the Meiji era (XVII-XIX sec.), while the advertising campaign is transgressive and impactful: the photography of Helmut Newton with Jerry Hall and the provocative slogan "Opium, for those who indulge in Yves Saint Laurent "create a strong desire but also a scandal of unprecedented proportions. 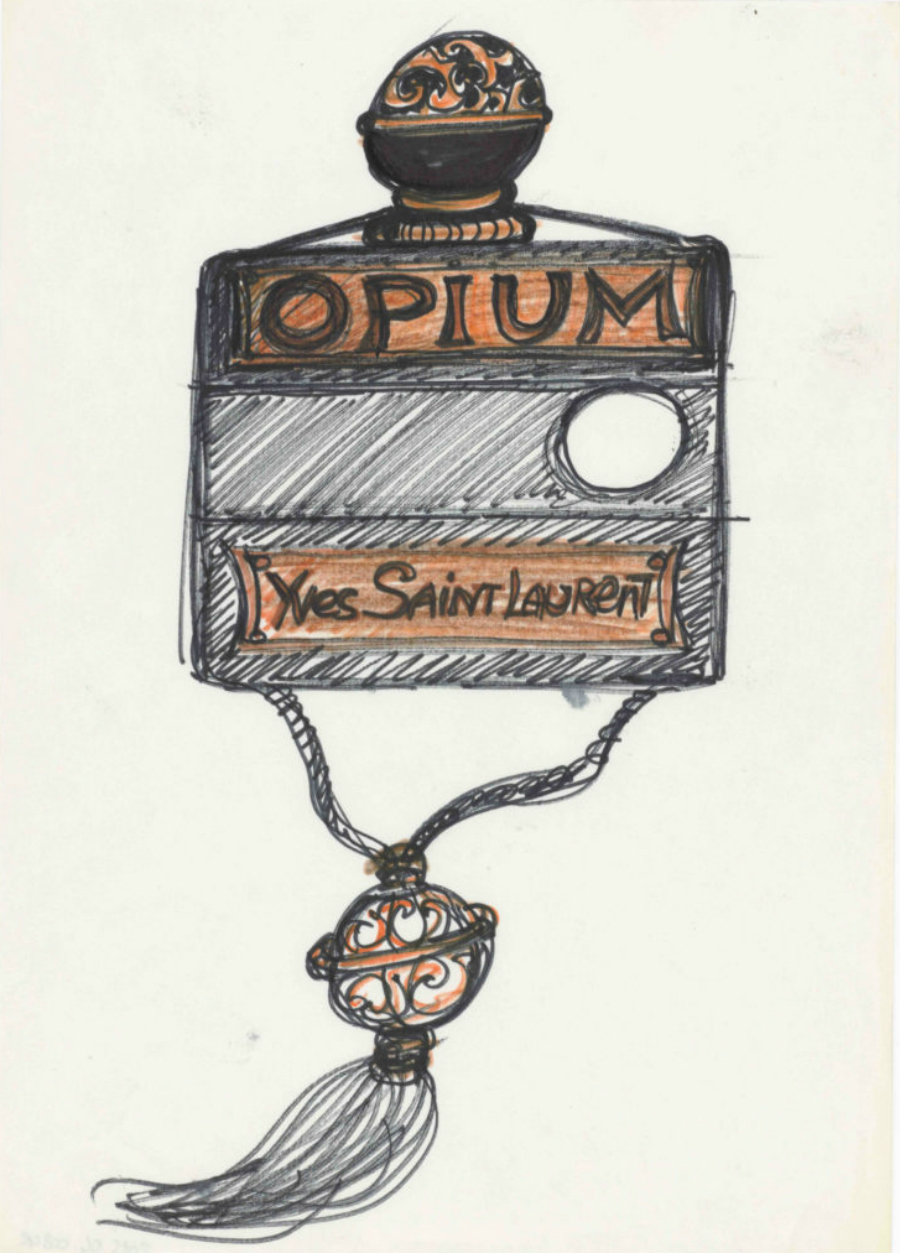 Sketch for the bottle “Opium”

Opium enters the US market in September 1978 with a spectacular launch party held on a boat called "Peking" moored in the port of New York. The American Coalition Against Opium and Drugs gave birth to a product boycott, flanked by the Chinese community who saw in the name of a diplomatic provocation. Despite this, this fragrance has remained for decades one of the most sold in the history of commercial perfumery. 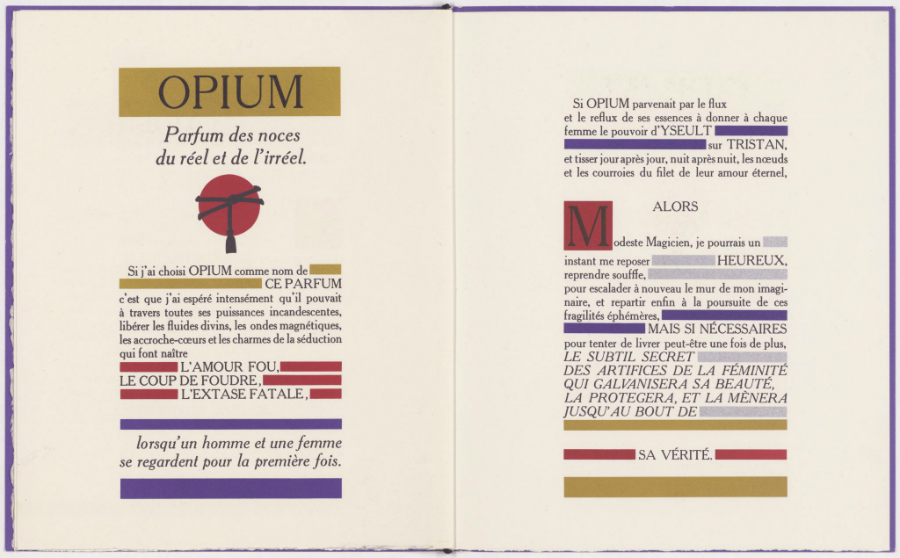 Press kit for the presentation of “Opium”

« Very early I went to meet Japan and immediately I was fascinated by this countryancient and modern and I, since, repeatedly been influenced. Others before meknew that admiration : Monet, Van Gogh and all the art deco artists who were soimportant in our time. Today, Japan continues to grow and has managed the miracleSupreme celebrate the marriage of past and present. " Yves Saint Laurent 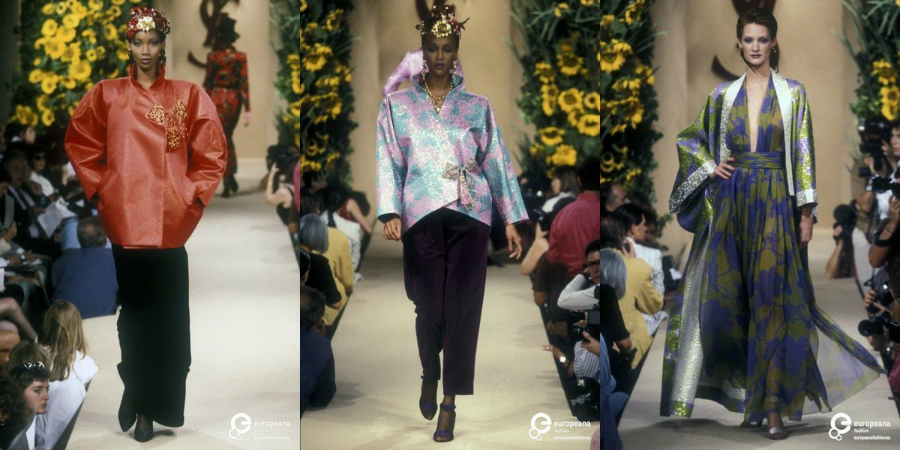 Nel 1963, Less than two months after opening the house of haute couture, Yves Saint Laurent and Pierre Bergé travel to Japan to present the spring-summer collection with the help of Hiroshi Kawazoe, Representative for the house of Yves Saint Laurent and Bergé in Japan personal friend. Visitano Tokyo e Kyoto, where they admired the famous cherry blossoms (sakura) along with brilliant courtesans dressed in kimono.

Saint Laurent and Bergé possessed a collection of lacquered furniture and boxes (War), whose decoration in gold dust (Maki-e) He showed a remarkable technical. The ceramics that were purchased mainly pieces of porcelain decorated with flowers and plants, reflecting the intrinsic connection of the Japanese people with nature. Most of these works were purchased in France through antique shops and galleries, while some were commissioned in Japan.

Fascinated the Edo era (1600-1868), during which the art has gradually freed from imperial power, and Kabuki Theater, Yves has repeatedly revisited the traditional Japanese clothing, the kimono. From the T-shape,  give this head a version that maintains the fluidity of the lines with a cross on top flap, He accompanies the silhouette in motion rather than constrain it. While reflecting the ancestral essence of Japan and its delicate refinement,  the kimono interpretation by the designer it is still a true original creation that pays tribute to the grace of the courtesans who roam the streets of Gion, restricted area of ​​Kyoto. The evening ensemble of the Autumn-Winter collection 1994 pay tribute to Japan with quote literally kimono. The traditional inner garment became a ceremonial coat worn over a dress. The trimmings embroidered with beads seminal replacing belts and were combined with long and short kimono. The silk lamé fabric quilted and printed for these bosses have been created by the Maison Abraham and are similar to traditional fabrics of the Nishijin district, where golden paper strips are inserted in the bottom plot. 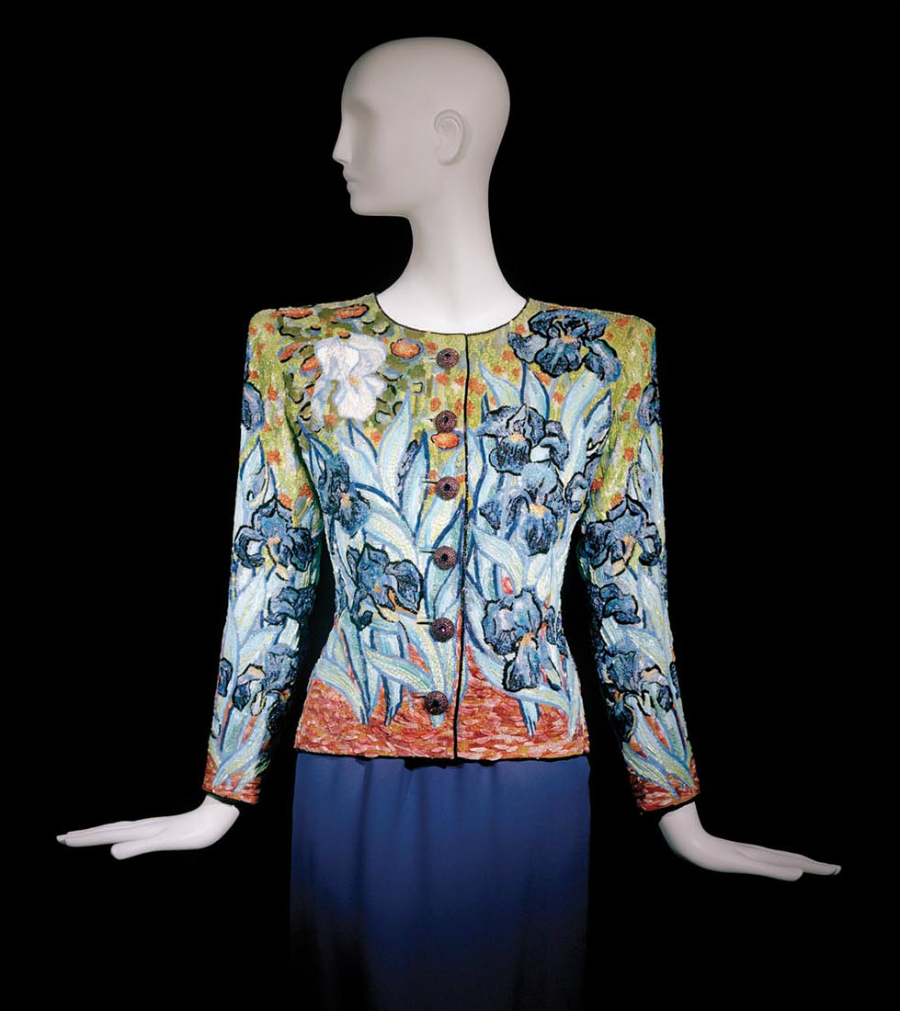 A series of seven evening dresses in crepe georgette autumn-winter collection 1970 They are inspired to Japan. Based on a simple and straight form and with a side opening for some, They were carried out in dark colors such as copper, the black, Navy and blue-green. The Japanese influence has been conveyed in embroidered motifs that decorate these designs, including cherry blossoms (sakura), glicine (fuji), plum blossoms (ume) and reeds, and remind the Japanese foliage depicted in prints and decorative objects. Two other drawings in light colors – a dress and a jacket – tunic in silk satin embroidered with butterflies and branches of cherry blossoms. Many of these garments have been embellished with chokers gold metal in the shape of butterflies and made by the artist Claude Lalanne. The nature occupies a prominent place in Japanese art:  in particolare, irises are often depicted in prints, temples and internal tissues. They are found in particular on overtime folding screens by Ogata Korin (1658-1716) Katsushika Hokusai prints and (1760-1849). After the Universal Exhibition of 1867, when Japan was officially present for the first time, The movement was born Japonisme, who influenced artists such as Vincent van Gogh (1853-1890), whose Iris painting 1889 (held at the J. Paul Getty Museum di Los Angeles) He reinterpreted the series of Iris and Grasshopper Hokusai. Saint Laurent continued on the same line when, for spring-summer collection 1988, he designed a jacket embroidered with the Maison Lesage embroidered painting by Van Gogh, in tal modo, mutual widely Japanese imagination.